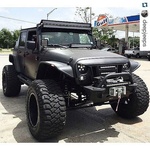 more_horiz
Ciao leggete un po' in questo thread,dice che andrebbe fatto codificare il volante da un conce altrimenti i comandi non funzionano, praticamente come mettere un nuovo hardware nel pc ma senza avere installato i driver...interessante...
Thanks DWBRubi!
During my research, I learned that the obstacle to getting the controls to work on pre-2011 JKs is the JK’s TIPM. The steering wheel controls are actually four separate modules or controllers. The clockspring will allow the modules to connect to the JK’s network and the MyGig will accept input from the steering wheel controls, but the pre-2011 JK TIPM doesn’t acknowledge their presence on the network.

This is the same issue faced by those who have installed cruise, factory fog lights, factory remote start, or the electronic swaybar disconnect. The consumer can install the device, but the dealer has to activate the device via the TIPM so that it can acknowledge the input from the device on the network.
It’s akin to installing hardware to a PC without the drivers. If I had installed the wheel in a 2011 or later JK, then Chrysler would allow a dealer to flash my TIPM so that it could work with the controllers. Unfortunately, Chrysler will not allow this, so I’m stuck like Chuck.

I would love for someone to find a work-around or offer instructions on getting the pre-2011 TIPM to accept these controllers. I saved the 2011 wiring harness just in case someone does. However I just don't see it happening without changing the programming of the pre-2011 TIPM. And I'm fine with it now. I knew that going in and I still have all the oem functions of the wheel, plus I can enjoy the new retro design and feel.
ecco anche il link della discussione:
http://www.jk-forum.com/forums/jk-electrical-lighting-sound-systems-13/completed-steering-wheel-conversion-2011-jeep-steering-wheel-installed-2008-jk-225159/
marcello717Jeeper °IIIII